A Brief History of Ice Cream

This week in celebration of National Ice Cream Month — Programs Manager Mary Lesher made ice cream. Try it out yourself and if you’re interested, continue to read about the historical context of the beloved treat, ice cream!

Melt the sugar in a skillet and add the water and let sugar dissolve. Strain mixture through a towel. Make custard with milk and eggs. Let both mixtures cool then combine. Add the cream and freeze.

Stir the mixture occasionally while freezing.

Can freeze and serve in molds or in a bowl or pan.

Question: Should you stir the ice cream while it is freezing?

This answer has two parts. Stirring adds air to your ice cream, which can help make it feel light. However, too much air and your ice cream will melt quicker. Premium ice creams and gelato typically have less air, which is why a pint of premium ice cream can weigh as much as a quart of budget ice cream.

For some more information, ice cream’s creaminess depends on the size of the ice crystals that form during freezing. Rapid chilling and constant churning encourage the water in the ice cream mixture to form tiny ice crystals and therefore feel smoother and creamier than ice cream that has fewer, larger crystals. Constant churning helps keep the crystals moving as they chill, so they have less time to attach to one another and form large clusters.

Question: Do you have to include eggs?

No! Many historical recipes do not include eggs, but they will help create a thicker, creamier custard flavor and texture to your ice cream, especially if you are not using a machine (hand-powered or electric) to churn your ice cream.

Today, everyone enjoys a frozen treat on a hot summer’s day and there’s a plethora of options to choose from ranging from vegan popsicles to rich gelatos.

Ice cream was first invented in the seventeenth century as a dish for kings. Beginning in the eighteenth century, English cookbooks included recipes for ice cream, starting in 1718 with Mrs. Mary Eales, the royal confectioner to Queen Anne. Recipes contained advice about how best to freeze the cream mixture to create ice cream. Mrs. Elizabeth Raffald’s cookbook of 1775 says to set the mixture: “in a tub of ice broken small, and a large quantity of salt put amongst it, when you see your cream grow thick round the edges of your tin, stir it, and set it in again till it grows quite thick, when your cream is all froze up, take it out of your tin, and put it into the mould you intend it to be turned out of, then put on the lid, and have ready another tub with ice and salt in as before, put your mould in the middle, and lay your ice under and over it, let it stand four or five hours.”

The French invented a tool to do this called a sarbotiere, but other options were available to those who could not afford a fancy foreign import. An English cookbook author, Hannah Glasse, recommended buying “two pewter basons” instead. Pewter was preferred because it was strong. Mrs. Mary Randolph’s 1824 cookbook The Virginia Housewife says, “The freezer must be kept constantly in motion during the process, and ought to be made of pewter, which is less liable than tin to be worn in holes, and spoil the cream by admitting the salt water.” Salt is necessary to lower the freezing point of the ice. Without it, the cream will never get cold enough to harden sufficiently to form ice cream.

The first official account of ice cream in North America comes from a letter written in 1744 by a guest of Maryland Governor William Bladen. The first advertisement for ice cream in this country appeared in the New York Gazette on May 12, 1777, when confectioner Philip Lenzi announced that ice cream was available “almost every day.” However, during this time ice cream was reserved for the wealthy due to the expensive ingredients required to make it. Anyone who owned a cow could have access to heavy cream, but sugar exported from the Caribbean islands and ice – stored in ice houses during the summer – were harder to obtain. Sugar was so expensive because the process of turning sugar cane into sugar is extremely labor intensive. On Caribbean islands, enslaved Africans labored in extreme heat and dangerous conditions to make the sugar that generated enormous wealth for the white Europeans selling it.

In the 1800s, ice cream was made in a wide variety of flavors including

Perhaps the strangest flavor was oyster ice cream (found in Mary Randolph’s cookbook) – a flavor many describe as Dolley Madison’s favorite, although no evidence suggests this was true. It was essentially frozen oyster chowder, unsweetened with the oysters strained out. In some ways, ice cream was considered a savory dish. Some Victorians even paired their ices with the meat or fish course. Mrs. Sarah Rorer suggested serving her cucumber sorbet with “boiled cod or halibut.” Her gooseberry sorbet was “usually served at Christmas dinner with goose.” Naturally, she served mint sherbet with lamb or mutton and apple ice with roasted duck, goose, or pork.

Often the ices were molded into fanciful shapes like fish, chickens, cauliflower, pineapples, and, especially, asparagus. The Victorians seemed to love asparagus-shaped ices, whether individual spears or whole bunches, and often served them tied up in pretty ribbons.

“When ice creams are not put into shapes, they should always be served in glasses with handles” (The Virginia Housewife, 1820s). Why do you think that was? Ice cream quickly melted so perhaps the handles were meant for ease of drinking the melted liquid. 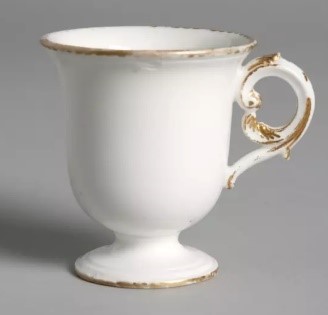 The Founding Fathers helped popularized ice cream in America. Records kept by a Chatham Street, New York, merchant show that President George Washington spent approximately $200 for ice cream during the summer of 1790.  A 1796 inventory lists “2 freising molds” in the Monticello kitchen, so his servants were making ice cream at least that early. When he was president, Jefferson had an icehouse built for the President’s House—called the White House today—and on Independence Day in 1806, hired a servant to turn the ice cream maker all day. In 1813, Dolley Madison served a magnificent strawberry ice cream creation at President Madison’s second inaugural banquet at the White House. 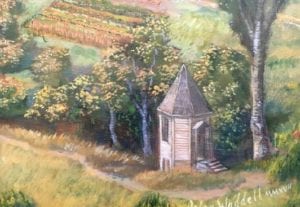 Ice house, close-up in a painting by Peter Waddell, located at Dumbarton House

A desire for ice cream is one reason wealthy Americans built ice wells – rooms dug out of the ground to keep ice (cut from lakes in the winter) frozen all summer. The ice would often be packed with sawdust or straw to help insulate it and prevent it from melting. Joseph Nourse had his ice house relocated to his property in Georgetown, called Dumbarton House today!

Until the nineteenth century, ice cream remained a rare and exotic dessert enjoyed mostly by the elite. In 1843, Nancy M. Johnson in Philadelphia received a patent for an “artificial freezer” consisting of a wooden bucket with a smaller metal cylinder inside. The interior metal cylinder contained a dasher that was turned by a crank handle. Rock salt and ice would be combined in the bucket surrounding the mixture of cream, sugar, eggs and other ingredients inside the cylinder. When the handle was cranked, the mixture turned and slowly began to freeze from the ice and salt. Additionally, the dashers scraped the ice cream from the sides of the can. The ice cream churner made this frozen treat easier to make and changed the industry forever.