Architectural Q and A

Questions and Answers previously compiled by staff, volunteers, and interns.

Was there a barn out back? A horse and buggy (carriage)? A stable?

Although we don’t know where the outbuildings were located, Joseph Nourse’s writings do tell us the type of outbuildings he owned.

Nourse moved an icehouse to his Cedar Hill property from his previous Georgetown residence. It is possible that he placed this octagonal structure over the functional storage pit to serve as a summer house (see image above).

After moving to Dumbarton House, Nourse built a bank barn into the slope of the hill to the north. Its south facing side was a stable; a nearby shed, open to the south, received the winter sun and provided shelter for the cattle. Higher up the slope, one could access the barn from the north entrance, which served as a carriage house. From his writings we know Nourse kept at least one carriage here that was outfitted with wallpaper and carpeting. It is possible that Nourse, like most of his contemporaries, also had an upper level in the barn for storing grain and hay.

Additionally, Nourse’s correspondence notes the existence of “servants’ cabins,” as well as a combined dairy and smokehouse. The dairy/smokehouse would most likely have been to the east of the house so the prevailing winds could carry the smoke away. Combining the two functions under a single roof, Nourse wrote, “saves one roof and a foundation.” It was also efficient, with a brick hearth in the upper level smokehouse and the necessary ventilation for the dairy below. Nourse also refers to a washhouse attached to the multipurpose building, as depicted at right.

What is the square footage of the museum house?

The section of Dumbarton House that today makes up the museum, measures approximately 4,000 square feet.

How high are the ceilings in the house?

Ceilings on the first floor are approximately 13 feet tall.

When were present hyphen & wings added to the main house?

The present wings and hyphens date to 1915, the year in which the central block of the house was relocated to its present foundation.

Upon completion of the Dumbarton Bridge (Q Street Bridge or “Buffalo Bridge”), the District government ordered that Bellevue (as Dumbarton House was named at the time) be moved some distance to the north, to allow for the connection of Q Street between Dupont Circle and Georgetown.

After the move, an attempt was made to salvage much of the original window and door trim and incorporate them in their reconstruction, however scientific studies have not been undertaken to confirm or deny that oral history. In comparing the present wings and hyphens with those shown in several pre-move historical photographs, it appears they somewhat resemble the originals. However, during the 1991 renovation and expansion, the east wing was slightly enlarged to its present configuration.

What was the exact northern boundary of Cedar Hill in Nourse’s time?

While we don’t know the “exact” boundaries of Nourse’s Cedar Hill, current research indicates that the northern boundary of the property was probably at roughly the same location as it is today.  Presently, that boundary is marked by the brick wall that separates Dumbarton House’s North Garden from Evermay’s land.

Nourse purchased the 4 acre property (our current lot—including grounds and parking—is just over 4 acres) and expanded it to 8 acres over his nine years in the house.  According to maps and museum records, we believe the additional land Nourse owned would have spread to the south of our current property—stretching beyond Q Street.

The northern boundary of Cedar Hill then—as it does now—bordered Evermay.  At the time, Evermay was owned by Samuel Davidson, a local character with whom Nourse had a friendly relationship. 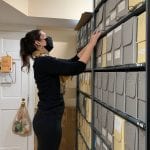 By Cheyenne Laux, Archives Intern October-December 2020 A small historic house museum, Dumbarton House has been the headquarters of the National Society of The Colonial … 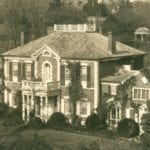 Historic Preservation Story Preservation projects aimed at returning Dumbarton House to the simplicity of its original Federal design were begun in 1931, three years after … 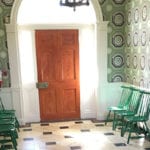 Dumbarton House is fine example of Federal period architecture. Our nation’s early years, from 1790 to 1830, generally define the Federal period. During this time, …